09 March 2022 | A recent engagement between Western Cape business and local government had, as its core focus, to further discussions around co-operation between the private and public sectors. This, for the betterment of all and reemergence of our local economy.

Convened by Accelerate Cape Town (ACT) – a business leadership organisation representing top-tier corporate business in the province, and sponsored by Old Mutual – an ACT partner, it provided attendees the opportunity to hear firsthand from local government and receive clarity on several issues pertinent to the provincial agenda.

Guest speaker, Executive Mayor Geordin Hill-Lewis, stressed his government’s agenda of economic growth. “To achieve this, it requires a local government that not only takes care of the basics but further ensures investment in key areas such as transport and infrastructure,” said Hill-Lewis.

Using the analogy of cities and sharks, and how they both need to keep ‘swimming’ to survive – Hill-Lewis spoke of the importance of infrastructure investment keeping pace with both inflation and population growth to ensure positive movement.

He went on to stress local government’s commitment to ensuring Cape Town is elevated to that of ‘easiest and best place’ to do business on the African continent (currently third). The advantage being an increase in business confidence – leading to greater investment with the natural knock-on effect of new opportunities and job creation. “It is about ensuring our people, all of our people, are employed and leading prosperous lives.”

To achieve this, Hill-Lewis outlined local government’s commitment and its projects across various initiatives, amongst other – sufficient renewable energy that would see the end of loadshedding in the Western Cape (level 3), the largest water desalination plant in the world by 2030 and a public transport system capable of connecting under serviced communities to the city.

Referring to the recent State of the Nation address in which President Ramaphosa stated, “We all know that government does not create jobs. Business creates jobs.” – Hill-Lewis reiterated local government’s commitment to creating conditions favourable for investment and the creation of jobs.  “We are also committed to our relationship with Cape Town business,” he continued. “We have set high standards for ourselves in terms of delivery, but it also requires partnerships with the local business community.”

Says Vusi Zingitwa, Old Mutual Regional General Manager and Chairman of the Provincial Management Board, “Partnerships are key and something we need more of! Business and local government need to collaborate and engage to understand how best we can work together. The business community wants and is committed to fostering increased relations with local government as we work together to create and enable sustainable growth for all our communities.”

It is heartening to both witness and experience increased gatherings, large scale sporting events, an influx of tourism, amongst other, as the world continues to ‘open up’ after the devastation of the last two years. “The stage is set for development and growth, and we are encouraged by the eagerness and commitment of business and local government to jointly play a part in redefining our provincial economy,” says Ravens. “We are confident that the intellectual capital – so present amongst our corporate sector, combined with a stable and functional local government, will see the Western Cape achieve enormous inroads into its provincial agenda. This – for the betterment of all, whilst also serving as an example of what is possible.”

Innovation & the Courage to Do Things Differently

Hope in a time of Crisis

22 March 2022 | “Business cannot operate effectively, or sustainably, in a society that is crumbling around us.” These were the words of Ryan Ravens, CEO, Accelerate Cape Town (ACT) at a recent convening between Western Cape business and key government infrastructure... 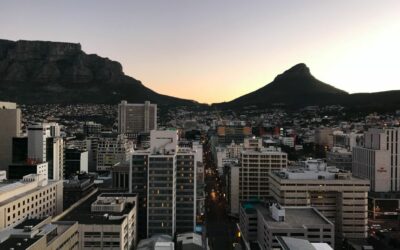 01 March 2022 | “As a regional business community, we welcome Premier Winde’s announcement during his recent State of the Province Address (SOPA) of the establishment of two new departments in the Western Cape – Infrastructure Development and Urban Mobility,” says...